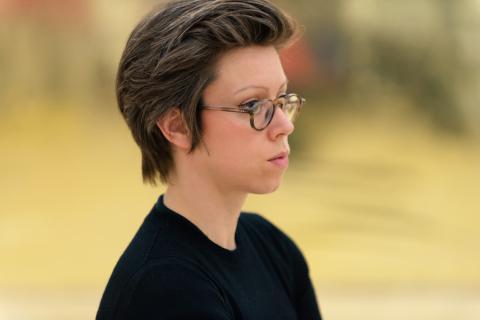 I am Artistic Director of Liminal Stage Productions, Associate Director at Omnibus Theatre (Peter Brook Royal Court Award Winner 2016), and Education Associate Practitioner at the RSC. I create original, formally ambitious stage productions that explore the interplay between different media, genres & forms, and that interrogate alternative perspectives in order to tell urgent, powerful stories about what it means to be human. This year I have been awarded a £10k Developing Your Creative Practice grant to build on my previous work with internationally-renowned British theatre and opera director Katie Mitchell and thereby develop the scale, multimedia complexity and international scope of my stage directing.

I trained at the RSC with Deputy Artistic Director Erica Whyman, at the Donmar Warehouse on Trafalgar Season 2012/13, & at the Print Room with Lucy Bailey. In 2016, I creatively produced & directed the transfer of my bold theatrical experiment, GREY MAN, at Theatre503. Previously, I creatively produced & directed my ACE-funded & “technically inventive” (The Stage) HOWARD BARKER DOUBLE BILL at Arcola (2015) & my ACE-funded centennial adaptation of WOYZECK launching Omnibus (2013). My debut production, the UK premiere of Barker’s LOT & HIS GOD at the Print Room (2012), kickstarted my directorial career, to great critical acclaim, following my year as Community & Education Officer at CFT. Alongside my directing, I am the youngest founding Board member of SDUK, a Trustee of the Directors Charitable Foundation & an elected member of Equity’s Directors & Designers Committee.

Courses (lasting a week or more) that I have completed since entering the industry include:

I have also completed many 1-3 day courses with companies such as Frantic Assembly and Complicite and with practitioners ranging from Anna Morrissey to Tim Crouch.

I speak some basic French, German and Italian