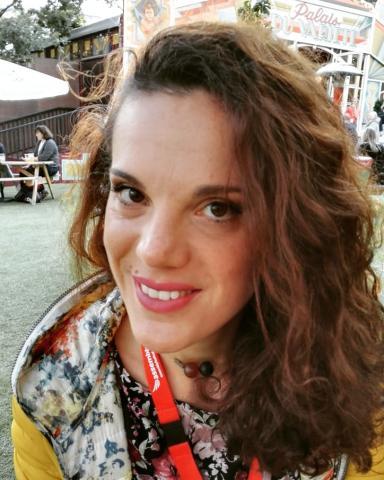 Known for a beautiful singing voice and honest delivery, Anna is an Italian singer and actor, based in Edinburgh. She debuted with her solo show "Dont' follow me" in 2018 and wrote and performed "Late Bloomers' Tales" for EdFringe2019.
She sings jazz/blues/pop.

I have many experiences in ensemble work. In Italy, I wrote my thesis on the method of "Schiera" (Italian word for "crowd"), studying with and acting for Gabriele Vacis, a famous Italian director who studied with Eugenio Barba. He's one of the main directors developing the work Grotowski. I studied as well with the pedagogue Barbara Bonriposi, who works with him and the actors in every performance. Her work is physically hard and demanding; she teaches the precision of movement and the importance of rhythm.
I also studied the Etjud technique with Giacomo Veronesi, participating in 3 long workshops in which we developed the technique of Anatolij Vasiliev's method through analysing and improvisng Checkov's plays. I love working with a group of people and improvising.
I took part in several other voice and movement workshops, one of which in Cyprus, devising an original piece of work with music, that dealt with the theme of "division" and funded by the European Union.
Here in UK I graduated in Acting for Stage and Screen in 2017 and acted at the Fringe Festival every year I've been living in Edinburgh.
Last summer I went to Stockhom to study and took part in the intensive workshop in mime and physical theatre held by Lana Biba and Txema Perez of 2theatre.
I loved plunging in such an intense and creative physical work, increasing my skills and devising a piece in a group, using mime and Lecoq platform technique.
My main skills are storytelling and singing. In Edinburgh I have been performing mainly as singer in the last couple of years, with jazz/blues/soul repertoire. I am very good with music and sound in general and I have a natural sensitivity in choosing music and recognising the right "level of sound" in an environment. (I've studied music since the age of 6 years old, I was classically trained in piano).
I wrote devised, directed and performed two cabaret solo-shows with storytelling/acting and live music for Edfringe (Don't follow me: my misguided tour, 2018 and Late Bloomers' Tales, 2019). In my show this year I used some mime technique, which is something I would like to implement in my storytelling, knowing the importance of a connected body for organic and believable delivery of texts and lyrics.