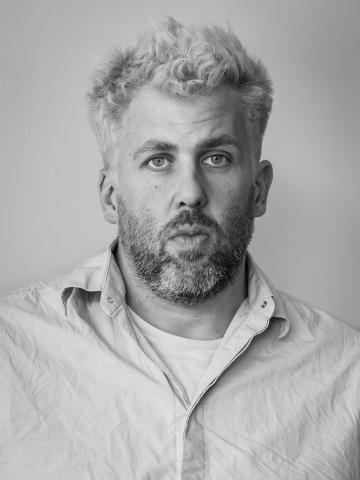 He/ him/ his
Than Hussein Clark (born 1981 in New Hampshire, USA, lives in London and Hamburg) works as an independent artist and was a founding member of Villa Design Group. He is also a member of the editorial board of the Hamburg-based Montez Press, established by the artist in 2012. After studying acting in New York and Los Angeles, he first completed a degree in art history in Edinburgh and London, after which he completed a degree in art at Goldsmiths College in London, and is currently finishing an MFA at the University of Fine Arts in Hamburg (completion fall of 2019 under Michaela Melian). Recent shows include The Paintings of Selma Vaz Dias at Damien & The Love Guru, Brussels, Meet Me At St. Louis, Lewis! at Centre Pompidou Paris, Stage for a Theatre on Mars at PLATO Ostrava, L'isola dei Baci (Disappearing Acts) at Kura Milan, School of Pain at Art in General, New York, Futomomo at CAC Brétigny, Paris, His Leftover Heart (Pauly et Cie) at Galerie Crèvecoeur Marseille, Deux Sens du Décoratif at CAC Brest, and The Director’s Theater Writer’s Theater at GAK, Bremen. He is represented by Mathew Gallery in Berlin and New York, VI, VII in Oslo, Galerie Crèvecoeur in Paris and Marseille and Galerie Karin Guenther, Hamburg.