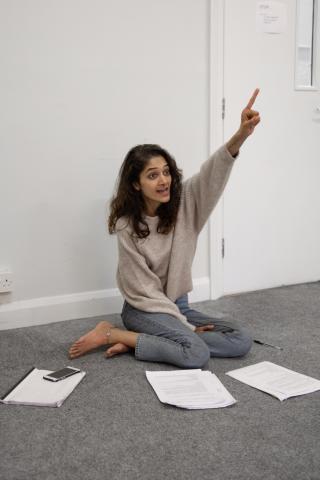 Aneesha Srinivasan (she/her) is a writer and director from Pune, India, currently based in London.
She co-runs Global Origins, a company that provides a network and platform for international and multicultural artists. Through her company, she works towards creating ethical theatre practice in terms of meaningful representation and diversity on stage, as well as developing a global approach to creating and commissioning art. In October 2019, she co-produced ARE WE THERE YET? festival of international art at the Bussey Building (Peckham, London), which featured poetry, theatre, installations, music and film created by artists from 14 countries.
Most recently, she directed the well-received Grindr Survivr: The Play by Stuart Young for the Upsetters at the Bunker Theatre (2020). In 2019, she directed Eleanor Tindall's Before I Was A Bear, a one-woman show based on the Greek myth of Callisto, about female friendships, the fluidity of sexuality, power dynamics and online abuse. The show ran from 12-23 November 2019 at the Bunker Theatre (London) and received 5* reviews. In 2018, she also directed Sami Ibrahim’s then short play, The Palestinian in the Basement is on Fire for Little Pieces of Gold at the Southwark Playhouse- the show is now being developed at the Royal Court Theatre.
As a writer, her primary interests lie in the fields of colonial literature, negotiating “oriental” identities in the sphere of Western theatre, gender and translation. Regular themes in her work revolve around systems of oppression and their effect on the lives of those they oppress. Her writing has been performed at the Bunker Theatre, the Arcola and Watermans Arts Centre, and has been longlisted by the Yard Theatre, Tamasha Playwrights, the Old Vic 12, Pint-Sized, Heretic Voices.
She mainly writes (and talks) about gender, postcolonial identities, queerness and language.

Director
Before I Was A Bear by Eleanor Tindall
Bunker Theatre
London, 12-23 November 2019

Director
The Palestinian In The Basement Is On Fire by Sami Ibrahim
Little Pieces of Gold: Southwark Playhouse
London, 23rd September 2018