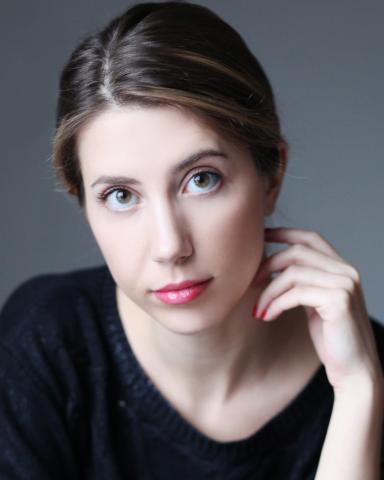 Vlada trained as an actress in London at East 15 Acting School and graduated with a Master of Fine Arts in Acting. She also holds a BA in PR and Media from Queen Margaret University, Edinburgh. She participated in residencies at Shakespeare’s Globe and Russian Institute of Theatre Arts (GITIS, Moscow). In 2015, she took part in The Summer Theatre School nearby Moscow, where she worked with some the most prominent Russian theatre practitioners.

Vlada founded Xameleon Theatre out of desire to produce work combining Russian theatre tradition with the modern, multicultural London's theatre scene. The company works with actors from the UK and Russian speaking countries, such as Russia, Belarus, Ukraine, Central Asian and Baltic countries.

Working as Xameleon Theatre's producer and artistic director she produced 9 shows between 2016 and 2020. She took her theatre company to various international festivals in Berlin, Tel Aviv and in Russia. Xameleon Theatre was also named as one of top three Russian theatres outside Russia by prestigious award "The Star of Teatral" in 2018 alongside with established repertory theatre - Russian Drama Theatre of Lithuania and Theatre Zero from Israel.

PRODUCER, The Marriage of Figaro, Xameleon Theatre/The Cockpit, 4 performances in 2017