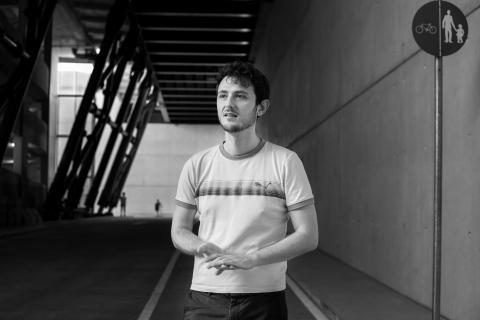 I am a London-based theatre director from Greece, working freelance and as the artistic director of Ferodo Bridges CIC, a theatre and performance company focusing on immersive work with an international perspective. In 2009 I graduated from Brighton University's Performance & Theatre BA course and later went on to study for an MA in Physical Theatre at St. Mary's University and an MA in Directing at LAMDA. Further studies include seminar courses on Ancient Greek Drama, Mask and Sound at the Ancient Theatre of Dodone with Nikos Karathanos, Michael Marmarinos and Ancient Greek Chorus with Michael Marmarinos and Stathis Livathinos from the National Theatre of Greece.
​
My work explores the limits of interaction between audiences and performers and tries to create a temporary space that will host a debate, an exchange and the possibility for creating a temporary community.

My directed work has been presented in Athens (Greek National Opera, Bageion, BIOS), London (BAC, Pleasance, 3Space, Oxo Tower), Brighton (Fringe, The Basement) and South Korea, where our production of 'Across the Border' (CakeTree Theatre) won the Best New Director and Best New Play. I have also worked as a producer and performer with Vacuum Theatre and as an assistant with the Actors Touring Company, Theatre Rites and the Manchester International Festival.